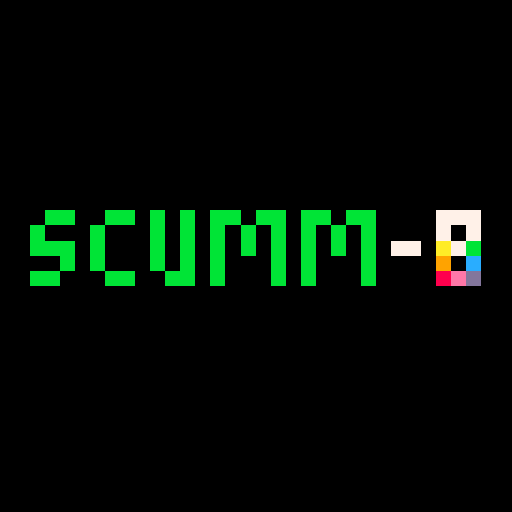 A year ago today, I released SCUMM-8, a Point+Click adventure game engine for the PICO-8 Fantasy Console.
While this project was started as a bit of a “dare” to myself to see if it could be done (and was partially inspired by this mock-up by PixelArtM) – it was one of the best decisions I’ve ever made. 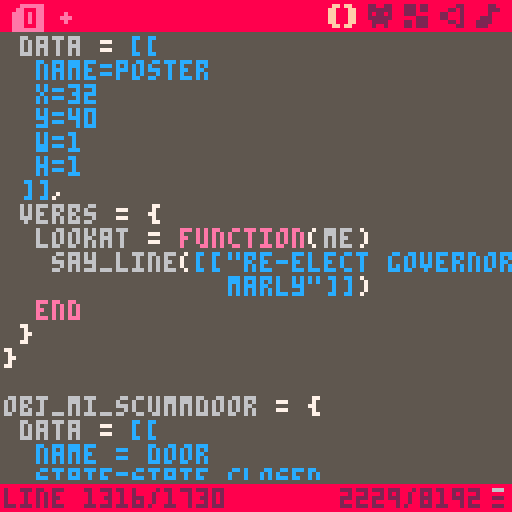 Researching into how the original SCUMM engine worked, what the API offered and how those classic Point+Click adventure games (such as Ron Gilbert’s Maniac Mansion and The Secret of Monkey Island) were made, was a very informative journey.

After poring over the original SCUMM Manual & Tutorial (courtesy of Aric Wilmunder, ex-Lucasfilm Games developer), I decided I wanted to keep the API as close to the original as PICO-8/Lua would allow.

However, squeezing all the functionality into a single PICO-8 cart (while still leaving SOME space for an actual game), required minifying the code. This was achieved using a function of picotool – created by Dan Sanderson.

While there were some technical challenges along the way (the PICO-8 platform has a deliberately very limited specification), I had so much fun making this engine.

I’ve done a few “demake” projects now (in fact – I’ve just realised that’s almost all I seem to do!), and I always seem to find it fascinating researching and reverse-engineering something that you are passionate about, to figure out how it ticks. I was originally concerned that, revealing the “magic” (or peering “behind the curtain”) so to speak, would ruin my love for these beloved games – but if anything, thankfully, it’s always made me appreciate them even more!

On release, SCUMM-8 was WAY more popular than I’d ever hoped it would be. I would’ve been happy if just a few people liked what I’d done, but the original launch tweet blew up on Day:1, and is close to 1000 likes!

I decided early on that I’d open source the project as I’d always wanted to put something up on GitHub, so this seemed like a good time to do so. But I never imagined that SCUMM-8 would be ported to any other platforms… let alone TWICE!

The first time was by Jesse Freeman, for his impressive Pixel Vision 8 fantasy multi-console.

The second time was by Matteusbeus, who has started porting it to the Mega Drive / Genesis ! (using the SGDK), as part of another open source project delightfully called: SCUMM-8-Plus-8.
(I hope to one day contribute to this one, as making a Mega Drive game has been a long time ambition for me)

Thanks to this project, I’ve had interactions with some wonderful people along the way, many of which are very active in the Point+Click community – some creating their own brand new games in this genre. I was even lucky to get positive feedback and “likes” from legends such as Ron Gilbert, Tim Schafer and David Fox.

It was also through this project that I was invited to be on my first podcast, by Todd Mitchell of Code Write Play. Todd’s a fan of both PICO-8 and classic Point+Click adventures and has been a great supporter (thanks!)

Well, although I’m mostly focusing on other projects now… I am planning to use it create my first ever entry to Adventure Jam (#AdvJam2018) this year.

While I have create a couple of small SCUMM-8 games before (most notably Return of the SCUMM and H A L L O W EƎ N), I’m hoping to really push what it can do in terms of visual storytelling and scope (spanning multiple carts) – even if it means finishing it post-jam.

I’d also still like to (some day) finish off the SCUMM-8 Editor feature that I started last year, in order to make creating games with SCUMM-8 easier, but it would be at the cost of losing the ability to have an entire game self-contained within a single PICO-8 cart, which is a feature that I am still proud of to this day.

Finally, to everyone who’s ever played, created or shared anything SCUMM-8 related…